“Architecture is a dream, geometry its tale, the handwork is the realization of the dream, the architect the one who tells dreams”.
Carlo Farroni

“In the depth of winter, I finally learned that within me there lay an invincible summer”.
Albert Camus

“Seeing involves choice. Whoever looks at something has decided to fix his attention on that one thing, to the exclusion of other things. That is why sight, the very essence of life, first and foremost constitutes a rejection. To live means to reject….. The only wrong choice is the absence of choice”.
Amelie Nothomb, The character of rain

“Anyone who tries to posses a flower will have to watch its beauty fading. But if you simply look at a flower in the field you’ll keep it forever, because the flower is part of the evening and the sunset and the smell of damp earth and the clouds on the horizon”
Paulo Coelho

Freedom is the quintessence of street photography. Freedom to explore the city whenever and wherever you want because when and where the picture were taken truly represent the photographer’s mood and inspiration. The remaining value of the picture are the subject you have chosen and how you’ll be able to portray it. In the current times of denied freedom and solitude of spaces, street photography turns to be annihilated and only the representation of emptiness and disappearance can remain.
In order to provide memories for the future, I am starting a daily recollection of pictures of Milano I have shot in the past years, while waiting the streets to be repopulated again.

A collective photographic exhibition of the members of PhotoMilano, the milano photographic club, was held from 18 to 20 october 2019 at the Exhibition Parc of Novegro, a neighborhood in the southeastern area of the city. This is the photo of mine which was selected for the exhibition. It portrays the wall paintings at the entrance to the subway station of Repubblica. It was shot in june 2018 using a fisheye lens.

Few days ago I happened to stop in the Galleria Vittorio Emanuele, in Milano, and watch a photo shooting session with a model wearing wedding dresses. The Galleria has a beautiful light in sunny days because of the colour of its glass roof and the marble floor has nice decorations which provide reflections ranging from pale brown to red and blue. The model stunned with her beauty. She was very tall and blond haired. Lots of people were standing around her but she posed and moved and walked very easily following the photographer’s instructions.

Still another visit of Venice for me in the Carnival season. This time I was in this magical city in the early days of the two-weeks traditional Carnival time, but masks were already there in a great number to be portrayed by lots of enthusiastic photographers. Each year I happen to visit Venice under Carnival, I feel newly impressed by the beauty of masks and of the people performing in the streets. The origins of venetian carnival are centuries old. It consisted in several weeks of festivity and fun in the whole city, during which people could indulge in music, dances and parties, barely working. Wearing masks and costumes made it possible for people to hide any differences of class or status, and it was even allowed to make fun of the aristocracy. The carnival became internationally famous and prestigious in the 18th century, when it reached its widest fame. At the end of the century, however, with Austrian occupation of the city, the tradition of wearing masks was forbidden. It was only in 1979 that the ancient tradition was restored, in the form still seen today. The pictures shown here were taken on february 23, 2019, around St. Mark’s square. 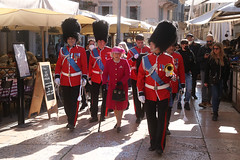 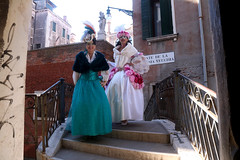 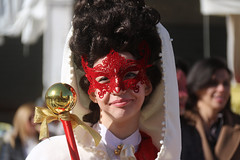 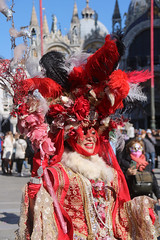 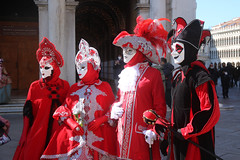 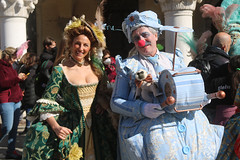 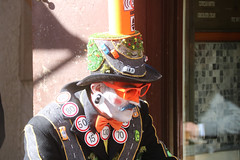 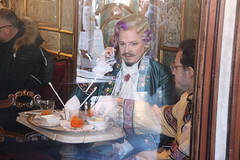 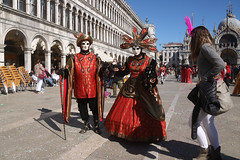 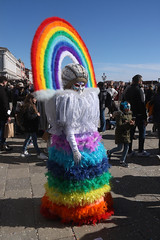